Parallel North won in the category of townhomes at the 2017 Fraser Valley Commercial Building Awards held in Langley on November 2nd, 2017. There were multiple categories in the annual celebration acknowledging the best in commercial, industrial and revenue-producing buildings from Delta to Chilliwack completed between Jan. 1, 2016 and Aug. 31, 2017. Diverse was… read more We are thrilled to be finalists at tonight’s Fraser Valley Commercial Building Awards for four of our projects! Chilliwack: Garrison Village Building 9 & 10 and Edgemont, Abbotsford: Parallel North, Mission: Horne Creek! Best of luck to everyone who is nominated  http://www.abbynews.com/…/finalists-announced-for-fraser-v…/ Diverse Properties Ltd (Diverse) is pleased to announce that it has partnered with Seraphim Investments Ltd (Seraphim) in the purchase of the Vicarro Lands (Vicarro) in Abbotsford, BC. Both Diverse and Seraphim are headquartered in Abbotsford, BC. Vicarro is the homesteads and ranch lands of the well-known local Trethewey family. The lands consist of 3… read more We're honoured to have been selected as finalists in three different categories at the Fraser Valley Housing Awards of Excellence! To win an award was just the icing on the cake. read more 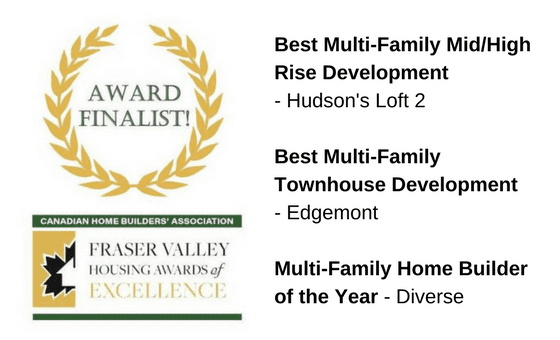 The Canadian Home Builders’ Association of Fraser Valley (CHBA FV) has announced the finalists for the 2017 Housing Awards of Excellence. Diverse Properties is honoured to be a finalist in the following categories: Best Multi-Family Townhouse Development – Edgemont Edgemont is a collection of 52 townhomes in eleven buildings. It features three unique architectural styles,… read more The Time is Now: Investing in Abbotsford Real Estate!

Abbotsford is being hailed as one of the top cities for investment in 2016 as stated by Don Campbell in Canadian Real Estate Wealth Magazine. “Over the past decade the Lower Mainland region has often been forgotten as an economic centre, but the spotlight will soon shine directly on this city as it become a… read more We are thrilled to announce that we’ve received the award for the Best Office Building in the Fraser Valley at the Fraser Valley Commercial Building Awards! It was such an honour to be nominated amongst some of the best. We are so proud of our office building – The Mark in Abbotsford! Find out what… read more We are thrilled to announce some exciting news, in fact you are the first to find out! Spruceland Homes has joined forces with another company and will now be known as Diverse. Other than a new name, and new look we’re still the same people. We’ve changed our name as we continue to grow in… read more Look out cupid, you’ve got competition this Valentine’s Day. The wonderful shops and services at Garrison Village in Chilliwack, BC have everything to make celebrating love and romance memorable and fun in the Fraser Valley. This 80,000 square foot retail complex is part of the new award-winning community of Garrison Crossing, located conveniently at the… read more Beautiful Both Inside and Out: A look at Spruceland’s NEW Edgemont Townhomes

Life would be boring if we were all the same, wouldn’t it? At Spruceland Homes we feel that sentiment extends to the places we call home, which is why our exciting new townhome development Edgemont offers buyers the choice of three unique architectural styles. There is discussion in popular culture and psychology that the style… read more Cat’s out of the bag, and we don’t care. We simply can’t contain our excitement and want to share! We have some great news: The Spruceland team is pleased to announce that we are counting sleeps until we launch a wonderful new townhome development called Edgemont. Our quality construction will be expanding the residential opportunities… read more